You can, however, buy our Super Strong Salty Licorice Powder (5g) and roasted crickets as two separate food products.

The sale of Salmiakkisirkka (Salty Licorice Crickets) as food has so far been discontinued in contravention of Regulation (EC) No 1334/2008 of the European Parliament and of the Council of 16 December 2008 on flavorings and certain food ingredients with flavoring properties for use in and on foods.

At the time of the entry into force of the Flavoring Regulation, the use of salmiak was restricted to known food categories, and, as early as in 2008, the inclusion of insect food as a food category was not even considered by EU legislators. EU Flavoring Regulation 1334/2008 stipulated that no salmiak should be added to foods for which the use of salmon is not regulated. For this reason, the combination of the legally marketed roasted insects and the legally marketed salty licorice powder results in a product that cannot be sold legally as food in the EU.

However, Salmiakkisirkka is not a must eat and can also be enjoyed as an eye dish, for example on a plate or beautifully set in a dessert cup. We do not want to deprive our customers of the opportunity to enjoy Salmiakkisirkka as eye food, so we decided to continue selling the product officially as a home decoration instead of food.

Finland, crickets and salty licorice (salmiak). Bug Bazaar could not resist the temptation to put them together and make this strange and exotic delicacy which only can be invented in Finland!

A crunchy cricket snack with salty licorice (salmiak) was invented by Bug Bazaar for the Finnish Kosmos Festival 2018 and tested at Salty Licorice Festival 2018 in Helsinki. Salmiakkisirkka was available on this page and Salty Licorice Festival 2019 in Helsinki where it was a huge success. Unfortunately, the product appeared to be an illegal product as of the meat products only red meat, chicken and fish are allowed to be flavored with salmiak but edible insects are not.

Bǚg Bazaar’s own brands are now again compliant with the EU insect food regulations taking effect on the 1st of January 2020!

Edible insects are rich in nutrients. The house insects contain plenty of protein, iron, creatine, calcium, magnesium, zinc in addition to which there is the fish’s type of omega fatty acid division between the omega-3 and omega-6.

Our crickets are 100% traceable and they are grown delicious in the natural heat of Thailand, the home of the most delicious insect food in the world.

Insect food can help us in keeping the food system within environmental limits. To get a kilogram of beef one needs 12 times more feed, 15 times more room and 22 000 times more water than growing a kilogram of insects. The insects offer a new lasting, ethical and delicious way to produce the proteins which are necessary to all of us.

A NOTE for purchases weighing one kilogram or more

Shipping costs for international orders are high and we want to offer the best possible service to our customers. In case your order weighs one kilogram or more, you should directly contact our customer service. In that way, we can manually tailor your order and plan the best shipping method for your needs!

Our crickets are not the cheapest because we only accept the best!

After an extensive comparison, we found a top certified and socially responsible cricket farmer whose crickets are the most delicious on the market.

Farmed in Thailand. Packed and flavored in Finland.

Our crickets come by sea from Thailand where they grow in tropical 35 degrees Celsius heat which is optimal for crickets. As a result, the carbon footprint of our crickets is much smaller than with insects produced in the heated production facilities of the Northern Hemisphere.

Our crickets have FDA, GMP, GAP, and HACCP.

Insects may cause an allergic reaction to those who are allergic to, for example, dust mites or shrimp. Food allergens are proteins. Sensitization to insect proteins is possible, just like to any other food proteins. The proteins that insects contain are similar to the proteins of e.g. crustaceans and mollusks. Thus persons who are allergic to prawns, for example, may have an allergic reaction from insect food. Insects may contain traces of gluten.

References to health-related statements above

Customers who bought this also bought… 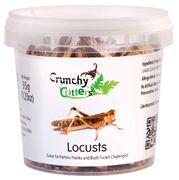 12,00 €
Copyright © Bug Bazaar - The Edible Insect Food Shop
Powered by MyCashflow - an easy to use web store
Your shopping cart is empty

A Cricket Recipe Collection By Aketta

Five Ways To Cook A Cricket

I Made 3 Recipes From 'The Cricket Cookbook,' And Here's How They Tasted