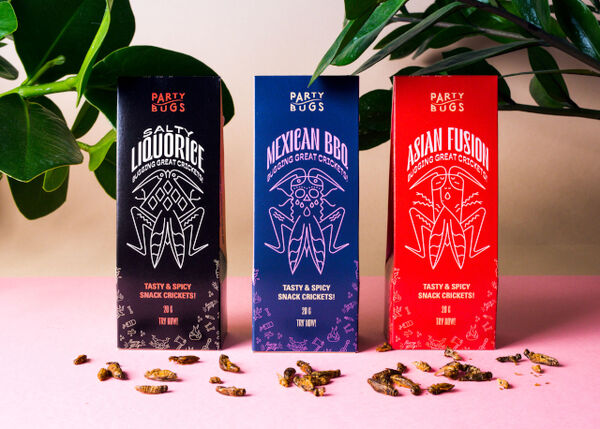 In September 2018, we wanted to offer edible insects for sale and founded Bǚg Bazaar webshop to become an international bazaar for edible insects, insect products, and insect protein powders. We also sell so-called "decorative insects", ie insects that are not officially allowed to be sold as food in the EU even though they have been produced as edible insects for humans.

Bǚg Bazaar is owned by Crickets Online Oy. Today, Crickets Online Oy's main brand is Party Bugs. Party Bugs was launched at trade fairs in Germany in January and February 2020 where it received a lot of attention and praise from international distributors in particular for its superior flavors, stunning packaging, cheerful image, and consumer-friendly prices. We warmly recommend trying Party Bugs yourself!

There are many healthy reasons to eat bugs.

Edible insects are rich in nutrients. The house cricket contains plenty of protein, iron, creatine, calcium, magnesium, zinc. They also have the same fatty acid division of the omega-3 and omega-6 like fish has.

Insects are a real superfood!

Insect food can help us in keeping the food system within environmental limits. To get a kilogram of beef one needs 12 times more feed, 15 times more room, and 22 000 times more water than growing a kilogram of insects. The insects offer a new a lasting, ethical, and delicious way to produce the proteins which are necessary to all of us.

Entomophagy, which describes the practice of eating insects by humans, has long traditions and has always been around. Ancient Romans and Greeks luxuriated with insects and the French still crunch grasshoppers between wine glasses. Cockchafers were considered a delicacy in France, Germany, Italy, Moldova, and Valakia long until the 20th century. We all eat at least half a kilo of insects every year hidden inside and as a part of our regular food.

Join the 2 billion people who already eat insects as a part of their daily diet!

Insect consumption is prevalent in 80% of the world, and 2 billion people feast with edible insects. Their insect food recipes are waiting for you!

Start your gourmet trip to the insect food wonderland and buy the highest quality insects from Bǚg Bazaar. And don’t forget our insect powders for cooking and baking!

We have edible crickets for sale and much more!

For information on new products, recipes, and offers, register as a customer or subscribe to our newsletter at the bottom of this page.

Register as our regular customer and enjoy volume discounts!

In case you do not yet have a customer account at Bǚg Bazaar, you can register here. At the same time, you can order our News Letter. Before registration, please read through and accept our Privacy Notice.